Follow in the footsteps of Marco Polo and uncover the natural and cultural treasures of Central Asia on this two week trip through Uzbekistan, Kazakhstan and Kyrgyzstan taking in some of the Silk Road’s best sites, from Bukhara and Samarkand to the Tien Shan Mountains.

Day 1  Tashkent, Uzbekistan
Arrive in Tashkent and transfer to your hotel.

Day 2  Tashkent
After a leisurely breakfast, enjoy a sightseeing tour of the city, visit Independence Square, the Old City with its mausoleums and bazaar.

Day 3  Tashkent to Samarkand
Transfer to the rail station this morning and take the fast train to Samarkand. A city steeped in history which once held a central position on the Silk Road. Visit the impressive Registan Square, probably the most recognisable monuments of Central Asia. Later, wander around the exotic Siab bazaar.

Day 4  Samarkand to Bukhara
After breakfast, spend some time exploring the sites of Samarkand before the drive to Bukhara, Central Asia’s holiest city.

Day 5  Bukhara
Start the day with a tour of the city and visit the Lyabi Khauz complex, site of the oldest pool of its kind in Central Asia. Later visit the Ark, a 5th Century citadel and Bukhara’s oldest structure.

Day 6  Bukhara to Tashkent
Continue exploring the sites of this medieval city before the afternoon train back to Tashkent.

Day 7  Tashkent to Almaty, Kazakhstan
Spend the morning to further explore Tashkent. After lunch, head back to the train station to catch your overnight train to Almaty in Kazakhstan. Travelling by train in Central Asia is a great way to see the changing landscapes and mingling with the locals.

Day 8  Almaty
Arrive into Almaty in the morning and enjoy some breakfast before taking a tour of the city.  With leafy streets and café culture, the former Kazakh capital has a distinctly European feel. The afternoon is free to spend at your leisure, perhaps take the gondola up Kok-Tobe Hill for panoramic views of the city

Day 9  Almaty
Explore the countryside around Almaty today as you head to Turgen Gorge, known for its beautiful natural scenery and waterfalls. Arrive at the gorge late morning and take a walk on a rocky/sandy trail following the river to cascading 'Bear' Waterfall. Later drive to a shady spot for some picnic lunch then continue onto Issyk Lake, set amidst thick forests and pastures with wild flowers. Return to Almaty for the night.

Day 10  Almaty to Bishkek, Kyrgyzstan
Journey across the border into the third and final country of your trip, Kyrgyzstan. Arrive into Bishkek in the afternoon and spend a couple of hours visiting the city’s main sites, taking in Ala Too Square, the White House, the Lenin Statue and the Manas Monument

Day 11  Bishkek to Djety Oguz
An early start as you continue through the Tien Shan Mountains and head to Issyk Kul Lake, the second largest salt lake after the Caspian Sea. It’s a long drive to Djety Oguz however the scenery is stunning and there will be plenty of photo stops along the way. In the evening arrive at Djety Oguz Gorge where you will spend a night in a traditional yurt.

Day 12  Djety Oguz to Karakol
Today you will explore the gorge on foot and learn about the local legends behind the name, passing through fir forest, yurt settlements and grazing lands. From the gorge drive to a viewpoint to see the Djety Oguz red rocks and then onto Karakol, a quaint town of cottages and shady avenues. After lunch take a short sightseeing tour, visiting the Dungan Mosque, the Russian Orthodox Church and the Victory Park before checking into your hotel. Tonight enjoy a home cooked meal with a local Uygur or Dungan family.

Day 13  Karakol to Issyk Kul Lake
Leave Karakol behind and continue around the lake to Cholpon Ata town on the northern shore. Have lunch in town then drive to the nearby petroglyphs to explore these relics. The rest of the day is spent relaxing on the beach or wandering around town.

Day 14  Issyk Kul Lake to Bishkek
Travel through the Boom gorge as you head back to Bishlek for your last night in Kyrgyzstan, en route visit the Burana Tower an 11th Century minaret and the first of its kind in Central Asia.

Day 15  Bishkek
Your tour comes to an end this morning, after breakfast transfer to the airport for your onward flight.

The tour itinerary, inclusions and departures are based on travel from 01/05/2020 to 30/09/2020. Guide prices are based on twn/dbl share, are subject to availability and may vary by departure date. For travel outside of these dates, the itinerary and inclusions may vary to that shown above - please ask for details.

As we can offer you such a flexible choice of flights, we don't include international airfares with our tour prices. The price you pay will be determined by the time of year you travel, your departure airport, airline and availability.

Your Trailfinders travel consultant will be able to find the best flights to suit you and your choice of tour. Please call for our latest offers.

Don't miss out - secure your place on the world's must do experiences before you go.

We offer hundreds of unforgettable experiences all round the globe, from city-tours to bridge climbs, balloon flights to whale watching cruises.

Take a look at the local tours we offer along the way and ask your Trailfinders consultant to add them to your itinerary for you. 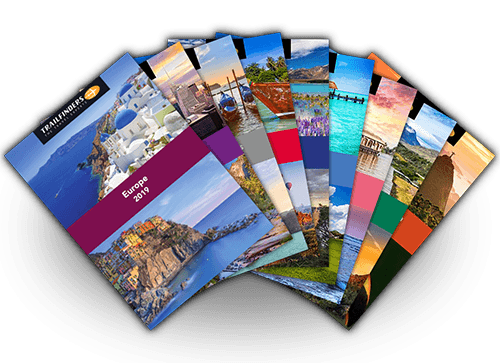